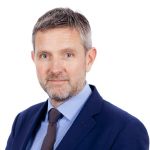 All are welcome- past pupils, colleagues, friends, current school parents and family.

After leaving St.Gerards in 1985, Larry went on to study Property Economics at DIT Bolton Street, graduating in 1990.

From College Larry joined Hamilton Osborne King (now Savills) where he went on to head the Retail and ultimately Commercial Divisions of the firm.

In 2010 Larry was appointed Chairman of the Irish business, a position he held until 2014.

In 2017 he moved his focus outside of Ireland with his appointment as Head of European Retail Agency.  He is now responsible for the delivery of the Savills Retail Strategy in Continental Europe, co-ordinating mandates between the individual country teams and Associate offices and developing and implementing the firms expansion strategy of developing viable business streams across the European markets.

Since joining HOK/Savills, Larry has been one of the driving forces behind the growth of the firm, particularly in the area of retail development, working on a number of major projects including Dundrum, Jervis, The Park Carrickmines, Whitewater,  Liffey Valley and The Pavilions Shopping Centre in Swords.