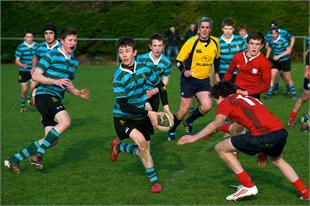 The JCT secured a final berth against St Andrews in the Fr Godfrey Cup and a first round tie in the JCT proper with a narrow nail biting 12-10 victory against a tough resilient CUS.

The JCT  secured a final berth against St Andrews  in the Fr Godfrey Cup and a first round tie in the JCT proper with a narrow nail biting 12-10 victory against a tough resilient  CUS.
St Gerard’s opened the scoring after 15 mins with a solid piece of play which involved a good passing movement between Sean O Reilly and Adam Simmonds who crossed over for the opening score.
He duly converted his own try to put St Gerard’s 7-0 up. Both sides were evenly matched for most of the first half. CUS finally got their break on the stroke of half time with their winger crossing over in the corner. The try was unconverted leaving St Gs 7-5 up at the half. Tackling on both sides was top notch with specific credit being given to Billy O Reilly, Jake Maguire and Andrew Lynch.
St Gerard’s got the opening score in the second half after 8 mins thanks to  a fine break by Simmonds who offloaded to Mark Gallagher who then duly scored to put St Gs 12-5 ahead .
CUS came back with a vengeance and were camped inside St Gs 25 for the next 12 minutes. Despite fantastic defending they got their just reward with a try in the corner to lead  to a pulsating last ten minutes of play.
CUS again looked very dangerous and pushed hard into St Gerard’s half. A little bit of youthful exuberance from St Gs gave CUS a last gasp attempt to secure victory. From the final scrum of play they
Lined up for a drop goal attempt from the following ruck. Thankfully tall Guy Martin ( son of past Pupil Rodney) was in the right place at the right time to block it  down! A minute later the ref blew his whistle and victory was secured….Well done lads and best of luck in the Final and First round of the cup proper.

Come support the JCT lads on Thurs 9th Feb at 14:30 at Stradbrook RFC as take on St Marys in the 1st Round of the Junior Cup.